New embedded single board computers, ECM-APL, ECM-APL2-A & ECM-APL2-B, equipped with the Intel® Apollo lake processor. These new SBCs are designed for dealing with the rising demands on low cost, light weight and system performance and expect to offer users a new solution for entry applications.

As a member of the Intel® Atom family, Apollo Lake reserves certain characteristics and advantages from its predecessor, Braswell, ex: a small die SoC designed to slot in below the Core architecture chips. This series is aimed at the entry-level application market and enabling Intel-based solutions to better compete with non-traditional devices based around ARM SoCs. Different from the past Atom series processors, Apollo Lake adopts the new Goldmount architecture and 14 nm manufacturing process. Furthermore, this processor integrates a newer GPU design based on Intel’s Gen9 GPU (same as Skylake series) to offer modern GPU features and better multimedia performance. ECM-APL, ECM-APL2-A & ECM-APL2-B adopt Apollo Lake processor as the system core for entry-level applications, still offer fair system performance. Generally speaking, the processor performance is raised 30% higher than the Braswell platform. The processor TDP is 6~12W which is very helpful for energy-saving and to prevent possible problems caused by the overheated system. 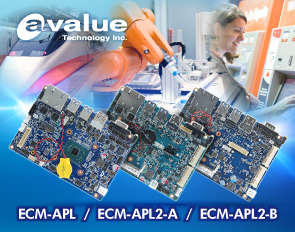 The main different between ECM-APL, ECM-APL2-A & ECM-APL2-B, please see the table of comparison as below:

Avalue Technology is a professional industrial computer manufacturing company, who is dedicated to developing the x86 and RISC architecture products.